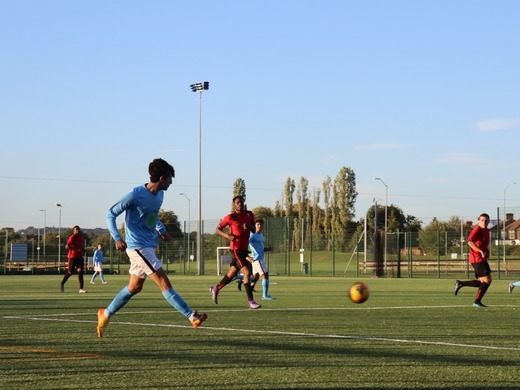 A MGBSFL Premier Division return for David Garbacz on Sunday didn't end well as Oakwood ran out 2-0 winners. Oakwood came into this game in high spirits after a recent run of good form and they didn't disappoint their fans in providing a fantastic victory over a Hendon team we expected to put up more of a fight in this game. Bradley Wine who has been in fine goalscoring form over the last few game weeks continued his good form in front of goal whilst new boy Felix Shalom rounded off the morning to continue the Oaks good form. Oakwood come up against Faithfold next week and will see it as another opportunity to continue climbing the league table. Hendon on the other hand face an away trip to Fairlop and will hope that Garbacz can quickly turn things around.

Coming into this game we feared this could be a tricky morning for HMH and in truth it wasn't all plain sailing. Raiders had the lion share of chances in the opening 20 mins and when Josh Bloom stepped up to the penalty spot to make it 1-0 it was looking as if HMH bad run of form could continue, however with Bloom missing his penalty, HMH quickly capitalised as Max Foster opened the scoring to make it 1-0 at Half time. The second half was all action and the game could've gone either way but HMH ran away with the victory, 2 goals from Ariel Rahamim and with Oscar Wagner continuing his form in front of goal made it a good morning for HMH. Raiders 2 goals ended up being consolation goals and a second penalty miss in the second half didn't help their cause but on another day this game could've gone the other way. HMH face a tricky game on Sunday as they welcome newcomers North London Galaxy to the Hive, whilst North London Raiders face an away trip to Jewdinese, where they will be hoping to get back to winning ways.

Borussia’s unbeaten start to the season came to a crushing end on Sunday, with a 5 star display from the Bears. Rory Carlson put the Bears ahead with a powerful header from a corner. Jared Rand scored a penalty which he had won to put the Bears 2-0 up before half time. Nathan Anders scored a scrappy goal to make three shortly after the restart. Jared Rand got his second of the game from long range, to make it 4-0. Barnet were then reduced to 10 men when Adam Freedman got sin-binned. And then it was 9 men shortly when Oli Hart was given a straight red. The Bears took advantage and made it 5-0 after Carlson and Rand linked up before Barnet put into their own net. There were several more chances for the Bears but Barnet scored a consolation from the spot. “We are buzzing with this victory, we scored 5 goals and to be honest it should’ve been more,” said Bears co-manager James Harpin after his side’s win. “We knew that Borussia Barnet would lose their heads if we took the lead and that’s exactly what happened. Breaking their 16 match unbeaten run is a great achievement but we are happier with the fact we are now second in the league. What we have to focus on now is beating Brook Farm Rovers next week to keep the pressure on Borussia Barnet at the top. Losing next week would counter the massive victory we’ve just had.” The win for the Bears moves them up into the 2nd place, 5 points off Barnet with a game in hand.

Brook Farm Rovers got their first points of the season on Sunday, beating Faithfold Green in yet another impressive showing from Rovers player manager Dan Cohen. “It was a really solid performance from us for 90 minutes,” said Cohen. “We defended resolutely and were a constant threat throughout. In the end, two penalties converted by myself and a breakaway goal from Adam Goldberg sealed the victory but we could have scored plenty more. Really proud of the boys after such a long lay off and now we’re looking to kick on and climb the table.” The win for Brook Farm sees them move outside the relegation zone, both Rovers and Faithfold have games in hand over the teams above them.

Vale put 5 past PSJ to cement their promotion challenge, moving up to 4th, 2 points off the promotion places with a game in hand. Vale took the league after just 3 minutes, a dangerous Charlie Becker throw forced a PSJ defender to head into his own net. Vale doubled their lead inside 20 minutes with a fantastic team goal from a brilliant attacking move, a James Millet through-ball released Josh Gorb down the left whose inch-perfect cross was nodded in expertly by Robbie Metzger for his 2nd goal of the season.  Vale started the 2nd half with the same intent, and they made it three six minutes after the restart, a brilliant ball from James Millet was dummied by Harry Graham, before Robbie Metzger picked up the ball and let fly from the edge of the area for his second goal of the match, and his 3rd of the season. The game was out of sight in the 55th minute as Josh Gorb’s ball found Harry Graham to slot home for 4-0. Despite numerous attempts on goal throughout the match, Vale only managed to grab one more before the final whistle, Harry Graham grabbing his brace with a good finish after being put through by James Millet in the 89th minute. “It was a professional performance from the boys after such a long break, said Vale co-manager Jacob Emmanuel. “It’s difficult to leave disappointed after a 5-0 win, but on another day, with slightly less rustiness and better finishing, we could’ve hit double figures. We move onto 2 more big games before yet another break! Best of luck to PSJ for the rest of the season.”

Chigwell continued their winning streak with an impressive 4-0 away victory over the Dons. The Dons nearly went ahead midway through the first half after an Isaac Virchis’ cross was headed by Jack Sawdon, crashing off his own post. The deadlock was broken when a free kick taken from Josh Klein was taken down by Stanley Offord for Jacob Bennett to finish.

The second goal came in the second half after Taylor Bedworth intercepted the ball, with it falling to Aaron Spalter who comfortably took on the defender before slotting past the keeper.

The third Chigwell goal was a goal of the week contender. Taylor Bedworth again won a 50/50 header and Joe Klein on the turn hit a looping volley into the top corner from 25 yards. Sam Singer saved a Max Aston penalty late on but Taylor Bedworth was on hand for the rebound to make it 4. “A superb performance by the boys,” said Chigwell manager Josh Dobias after the game. “Executed the game plan superbly. On another day the near own goal goes in and changes the game completely but credit to the team to go and secure the win. We wish the best of luck to MH Dons for the rest of the season.” Dons manager Brandon Hammé was very frustrated with how his side played “I am struggling to remember the last time we played that poorly. We weren’t at the races throughout and we didn’t want it. Chigwell wanted it more than us and they got what they deserved, they were up for the battle and we were not. I’m very keen to forget this game in a hurry, full credit goes out to Josh and the Chigwell side, they deserved the three points.”

Stoke Salmon came out on top against SPEC after an end to end game. Former SPEC player Jamie Smaje came back to haunt his former club winning a penalty just before half-time. However, it was Salmon's Jonny Halmer who gave a man of the match performance, grabbing a goal and keeping SPEC down to just one goal.

A fantastic performance from SPEC's goalkeeper kept them in the game for the full 90 minutes, and limited Salmon to three goals.

We caught up with Stoke Salmon's gaffer after the game, "Huge win for the boys coming back from the break. A slow start from us which was to be expected, however we were given a boost shortly before half time when someone put 50p in Jamie Smaje, he’s decided to end the Sunday league careers of 6 Spec players and won us a penalty. Second half we were completely dominant, and had it not been for a fantastic display from the Spec goalkeeper as well as some questionable finishing, it could’ve been double digits. Trademark performance from our number 1 Josh Tray too, pulling off multiple excellent saves and politely reminding the referee of the laws of the game. Big mention to Jonny Halmer on his first start for the club, solid defensively and a goal to top it off, best goals to minutes ratio in the club."

It was a goal-fest between Redbridge JC and Scrabble, in one of the games of the season so far. TEN goals were scored between the two teams in an end to end game.

Goal of the game came from Redbridge's Jimmy Castle, however, it was the performance from Sam Cormack that grabbed the headlines. He went onto score a brace, after scoring the crucial 6th goal to put the game to bed and secure the first three points of the season for the Essex side.

We caught up with Redbridge Jewish Care manager David Castle after the game, "We started the game really well, pressed from the front aggressively, forced mistakes from their defenders and got two really pleasing early goals from Ben Nathan and Sam Cormack, both following in on rebounds from their keeper. Jimmy Castle scored the pick of the bunch to make it 3-0 by placing the ball in the top corner from just outside the box before Josh Joseph scored a well deserved goal from the spot and an own goal meant we went in 5-2 up at the break. We didn't come out for second half with the same intensity as we did the first and and some sloppy play allowed Scrabble to get the score back to 5-4 until Ben Nathan put a great ball through to Sam Cormack who finished coolly to get his second and get us our first three points of the season." 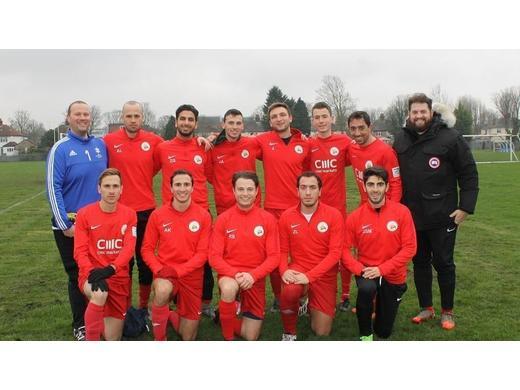 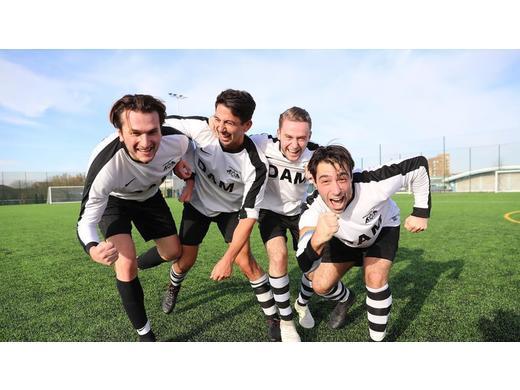 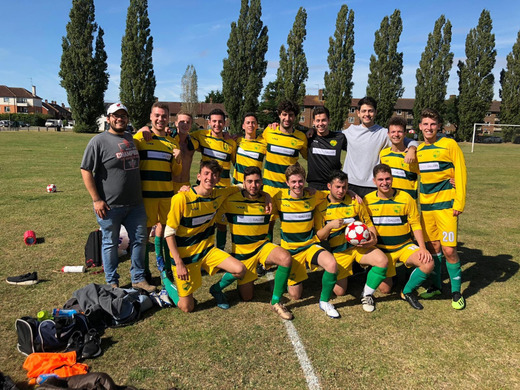 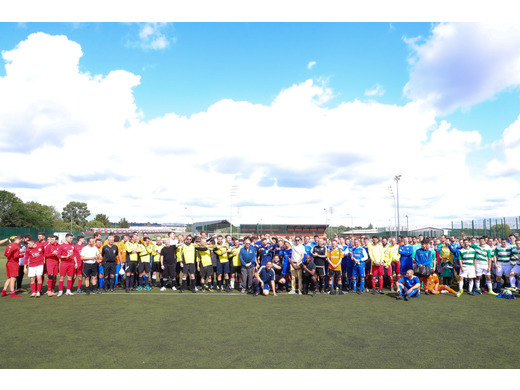 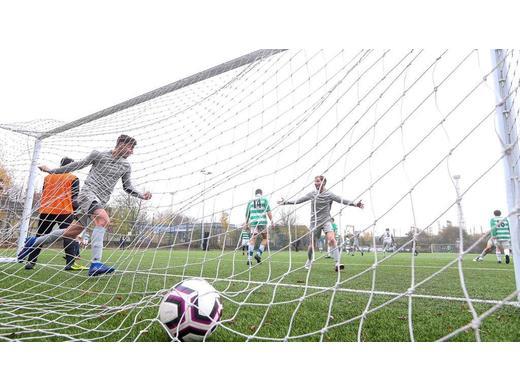 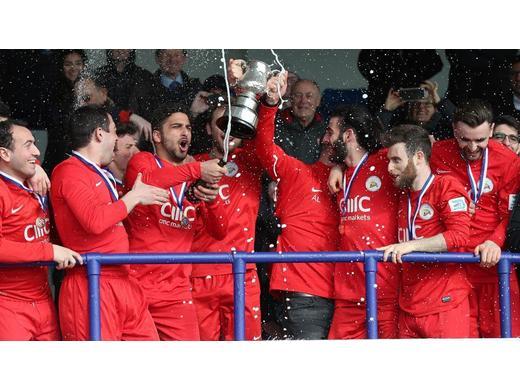 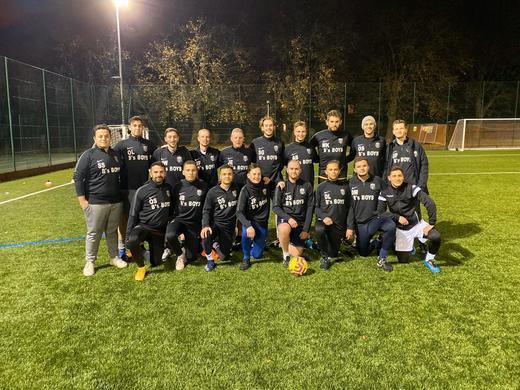 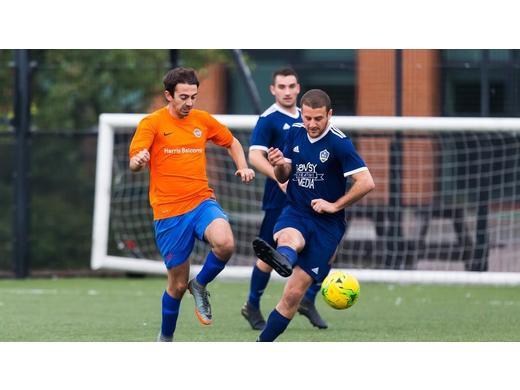 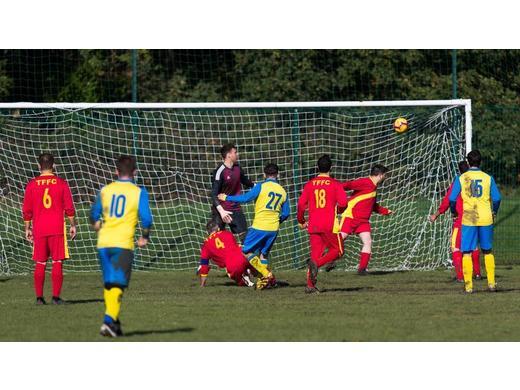